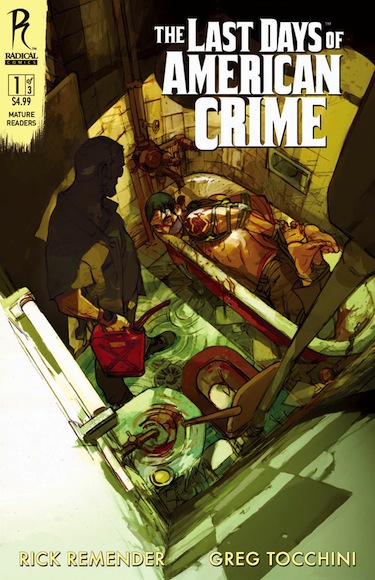 The Last Days of American Crime takes place in the not-too-distant future, where the U.S. government plans in secret to broadcast a signal making it impossible for anyone to knowingly commit unlawful acts as a final response to terrorism and crime. To keep this from the public, the government creates a distraction, installing a new currency system using digital charge cards. Graham Bricke, a career criminal never quite able to hit the big score, intends to steal one of the charging stations, skip the country and live off unlimited funds for the rest of his life. But the media has leaked news of the anti-crime signal one week before it was to go live… and now Graham and his team have just a few days to turn the heist of the century into the last crime in American history.

Critics and fans have raved over The Last Days of American Crime #1.

“From cover art to opening pages, Last Days hits readers with an unflinching dose of pulp noir seediness and doesn’t let up.” John Geddes, USAToday.com
because there are no new stories, writers must perform a magic act in order to make the reader believe he is reading something new. Well, someone get Rick Remender a top hat and a wand because he accomplishes it in the down and dirty Last Days of American Crime. By infusing a classic noir heist with the tension of modern American politics, Remender gives us a great opening to a comic series perhaps even on the level of Criminal or 100 Bullets.”

The Last Days of American Crime #1 is a good first issue that sets up the world and the crime at hand well. If you enjoy Criminal and other crimes books, you’ll probably get a kick out of this.

Remender paces this first act with just enough information, bravado, and grizzled noir to keep a hungry reader satisfied. Noel Bartocci, Broken Frontier
This is crime fiction at its best. Remender totally immerses you in their world, and it’s a hell of a ride.